Iron builds up in our cells as we age and, in particular, it is known to accumulate in the part of the brain that is vulnerable to Parkinson’s. For this reason, researchers have been studying whether removing excess iron with iron chelating drugs could be beneficial in Parkinson’s.

Oxidative stress and mitochondrial dysfunction have been considered as one of the main mechanisms involved in cell death in Parkinson’s – oxidative stress is exacerbated by excess iron. Chelation (removal) of this free iron has powerful antioxidant effects known to dramatically increase cell survival, and it is hoped that decreasing the levels of iron in the brain will improve symptoms and decrease the rate of disease progression.

For this reason, Cure Parkinson’s supported the recent Deferiprone trial, and the results of this study are expected in 2021.

Read more about the Deferiprone trial

Cure Parkinson’s is continuing to champion iron chelation for Parkinson’s and trustees have awarded a grant to develop the next generation of iron reducing drugs.

Current iron chelators can have dose limiting side effects for patients, and for this reason a new generation of drugs is being developed. As part of this development process, Cure Parkinson’s is funding Professor David Devos, University of Lille, to investigate one of these next generation iron chelators – called SP-420 – in models of Parkinson’s.

SP-420 is a novel iron chelator being developed by the biotech company AbFero Pharmaceuticals. It has displayed excellent tolerability and safety in initial clinical trials. The molecule is in development for several other conditions but, because it crosses the blood-brain-barrier and removes abnormal brain iron levels in animal models and reduces cell death in culture, it is an ideal candidate for Parkinson’s.

We believe SP-420 is one of the greatest iron chelators, given it has excellent kinetics, high oral bioavailability and biodistribution, and no evidence to date of inappropriate competition with the native iron transport and storage mechanisms of the body.”

This project will define the best doses to use in any future clinical trial and will explore who responds best to the drug and why to ensure that SP-420 can move rapidly into clinical trial.

Find Out More About 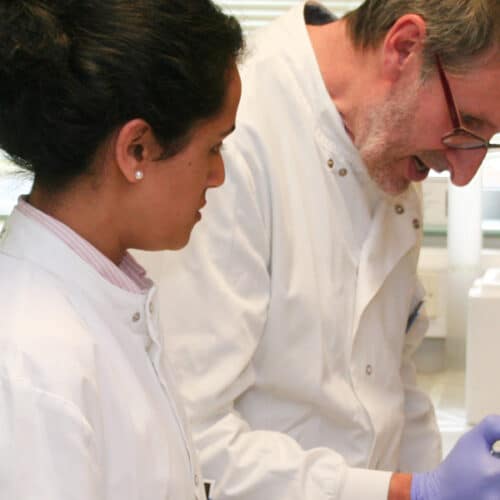