A ground breaking Cure Parkinson’s supported study that involved screening over 230,000 molecules has identified farnesol, a molecule commonly found in essential oils and plant-derived foods, as a new potential treatment of Parkinson’s.

Parkinson’s is a neurodegenerative condition that is characterised by a toxic accumulation of proteins in cells. A lot of research into the biology of Parkinson’s is focused on a protein called alpha-synuclein, but this is not the only protein that accumulates in the brains of people with Parkinson’s.

A research team at Johns Hopkins Medicine, led by Professor Ted Dawson, has been investigating another protein that accumulates in the Parkinson’s brain called PARIS. The team have previously reported that a build-up of this protein can cause neurodegeneration, and blocking this accumulation can rescue models of Parkinson’s.

Now, in a Cure Parkinson’s funded project, these same investigators in collaboration with South Korean scientists, have conducted a large scale drug screening study to identify molecules that block cell death caused by PARIS accumulation. By screening 230,000 drug-like compounds, they have identified a molecule called farnesol as a potential treatment.

Farnesol is a component of vitamin K and naturally occurs in fruits such as peaches, in vegetables such as tomatoes and corn and herbs such as lemongrass and chamomile. It is also used in perfumery to emphasise sweet, floral scents and is widely present in consumer products. It is not however approved for medical use.

Prof Dawson and his team found that farnesol robustly blocks the detrimental effects of PARIS build-up in cells grown in the lab. They also fed mice a diet high in farnesol and reported that it accessed the brain, reduced the negative effects of PARIS and protected different models of Parkinson’s.

As part of our effort to bring novel disease-modifying therapies to the Parkinson’s community, Cure Parkinson’s is urgently exploring taking farnesol into safety and dose finding evaluations to progress its clinical development.

Farnesol: The farnesylator of PARIS 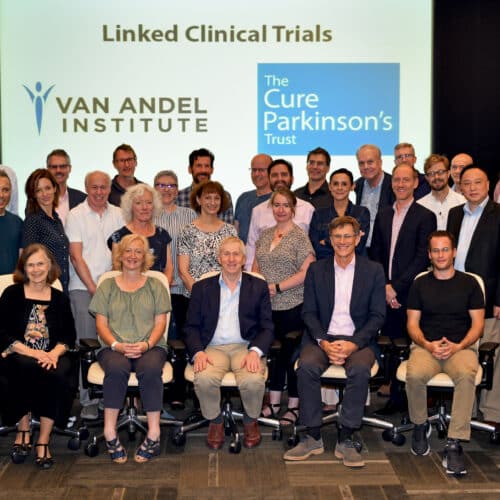 The drug development pipeline for Parkinson’s